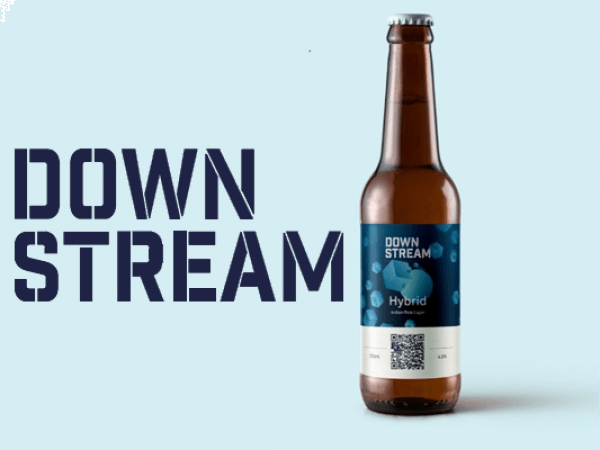 Downstream is back!.... and this time it’s personal

Those of you who follow my blog The Dirty Hallion might remember I wrote a piece on Downstream IPL when it was released last year. As a beer nerd I loved being able to know more about the beer I was drinking and the fact it was a pretty tasty brew was an added bonus.

Well it’s back, the IT guys have revamped the website, the design guys have updated the branding and the brewing guys have tweaked the recipe of the beer. So I decided it was worth another look.

And for those of you who don’t read my blog or have been living under a rock and haven’t heard of the worlds first blockchain beer, I’ll go over the concept and how you go about using the QR code to find out the story behind your bottle.

So you walk into your local bottle shop and head to the craft beer section, what was once a few random bottles, is now a whole isle, with shelves laden with brightly coloured cans and bottles, funky logos, hilarious names and a multitude of 80’s pop culture references. There are IPAs, Imperial Stouts, Sours and beers with every fruit or unusual ingredients you can imagine.

For the experienced beer geek it can be a lot to take in, but for the craft newcomer, it’s darn right overwhelming.

Throw on top of that, contract brewers, gypsy brewers, macro breweries pretending to be micro, microbreweries who were independent but sold a controlling stake in their company last week etc.

And who could forget the horse meat scandal a few years ago, I’ve not eaten a crispy pancake since!

What the food and drink sector needs is absolute transparency, so that customers know what’s in their product and where it came from.

When you’re trying to eat fresh and reduce your carbon footprint, the last thing you want is for your dinner to have been made 6 months ago on the other side of the planet.

So the guys at Ireland Craft Beers teamed up with whizz kids at Arc-Net and brewmeisters from Mourne Mountains Brewery and set out to solve this problem for good.

What they came up with was groundbreaking and ambitious.

First thing you see when you look at a bottle of Downstream is the large QR code on the front of the label.

All you have to do is scan that code (with the simple point of your iphone camera at the bottle) and you’re directed to a web-page that takes you through ever step of the brewing process, from where the raw ingredients come from to the mineral content of the water.

It’ll even tell you the name of the guy who bottled it, which may seem to be going too far, but it just shows you the kind of detail covered in the traceability of the process. I’m sure Tom Ray will be a cult icon in no time.

But this system is more than a customer resource or a tool for beer geeks like me.

It also has massive benefits to retailers and distributors. If for any reason they need to trace a food or drink product back to its farm or place of origin it can take on average 6 days 18 hours and 25 minutes. Using blockchain technology, this same process takes 2.2 seconds!

The benefits for the consumer and retailer are clear. But it needs to be taken up by more brewers, so what’s in it for them.

Well simply put, business is about giving the consumer what they want. And right now people have never been more conscious of what goes into their bodies. It’s all about that word again 'Transparency'. Local brewers put so much time, effort and quality ingredients into their beers, they should be happy for the consumer to get a glimpse of that and appreciate the work that goes into their pint.

Clearly I'm a fan of the whole blockchain concept, but now we’re gonna forget all about that and concentrate of the most important aspect of Downstream, the beer itself.

I really enjoyed this beer the first time round, light and easy drunk but fully flavoured. It featured as part of a selection of local beer in a tasting evening I hosted with a mixed group of craft beer fans and newcomers to the scene. Downstream received high praise from all involved, it was even the beer of the evening for a few of them, with the newcomers particularly liking it and praising its drinkability.

They’ve tweaked the recipe for the new release, reducing the malt and increasing the hops.

It pours a bright golden colour with a decent head. On the nose it’s strong citrus notes, pink grapefruit, and slight hint of something tropical, mango maybe.

First sip and again there’s the citrus notes but with a pine follow up. It’s got a crisp light mouthfeel that you expect from a lager and a very clean finish making it a great session beer for the summer.

I really like the changes to the recipe, it’s now a much more complex beer but I wonder if it’s too much of a challenge for the newcomers who liked the first so much. I don’t think it should be, it’s definitely another step up the craft beer ladder.

I’ve a stash of bottles in my fridge, so I’ll maybe use them in my next tasting evening. …..if they last that long.